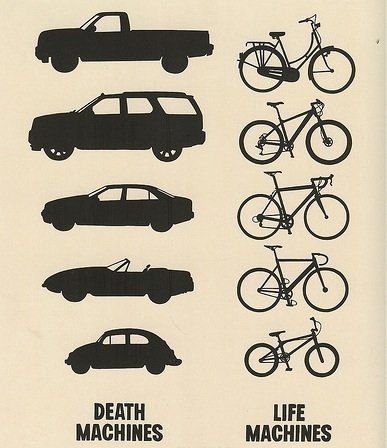 Bikes vs. Cars is one of those issues that tends to get people’s panties in a bunch. It’s one of those discussions that invariably gets opinionated and loud. Recently I’ve been in a number of debates about this and thought it would be a good place to start this blog.

My strong belief is that bikes are better than cars for people, communities, and the planet. Thus I think cities should be actively improving cycling infrastructure and passing legislation that incentivizes cycling. That’s not to say I don’t think people should own cars, I love my car, I just think people drive their cars far more than they need to or should and it should be easier and safer to choose a better option.

Because I tend to champion bikes (or other alternative transportation) over cars, I often find myself either getting into a heated debate or, more frequently, holding my tongue and listening to a rant about that one time a biker ran a stoplight and how lame it was. Sure, bikes can be annoying to drivers from time to time, but so can other drivers changing lanes too often (or not enough), or the sun coming through your windshield at the wrong angle, or NPR pledge drives.

Anyone that’s ever spent a significant amount of time on a bike has heard:

“Get off the road!” Never mind that the leg powered 2 wheel people pay the same taxes  and have just as much claim to the road as the 4 wheel folks (most cyclists also own cars so don’t give me the registration and emission fee nonsense).

There’s a sidewalk right there!” Never mind that it’s illegal to ride your bike on the sidewalk in most cities.

“Fag!” Uh… not sure how to respond to that one… “Breathe buddy. We all know that you totally love p*&sy! We can tell how manly you are by your Truck Nutz.”

I could go on about the honking, swerving, close passes and other sketchy moves and rude gestures that every city cyclist has encountered if he or she has been biking for more than a week or two (and maybe I will in another post. It’s pretty baffling.) but I’ll get back to the original conversation. Even though this conversation started out with shared frustration over a shitty attitude that we’ve both experienced, it quickly turned into an indignant rant about cyclists running stop lights, stop signs, or otherwise being inconsiderate to drivers.

I can always empathize with frustrations about no-brake fixie riders that blow through red lights yelling, “No brakes!” or the road cyclist making sketchy passes through families on the bike path, “Strava!”. It gives all cyclists a bad name, it’s dangerous, and it’s rude (albeit not nearly as dangerous and rude as swerving a 2 ton truck into the bike lane with your middle finger out the window). Where I usually have to shut up and let the rant run it’s course is when they start complaining about it not being fair that cyclists can roll a stop sign or proceed through a red light when there is clearly no traffic in either direction. I understand why people think bikers should have to obey the same exact laws as cars on the road… but I disagree with it.

I think we can all agree that cities would be more pleasant if there was less traffic and that healthier, happier people generally make better citizens, neighbors, family members, and friends. No one likes a grumpy friend or neighbor, no one wants a sick family member, and no one likes being stuck in traffic.

In addition to common sense, there’s plenty of research out there showing that people who exercise at least a little are healthier and even happier. People who engage in some amount of physical activity (like riding their bike instead of driving) have less risk of cardiovascular and coronary disease, stroke, diabetes, cancer, high blood pressure, mental health issues, stress, anxiety and obesity. These are the largest causes of death in our society, the largest drains on our healthcare system, and they can be massively minimized by utilizing a transportation method that would replace a method that causes pollution, poor health, and pissy people.

An abundance of research exists linking traffic to pollution and pollution to poor health of both humans and our planet. It’s such an obvious and unquestioned fact that I don’t feel I need to discuss it any further. Pollution = bad.

If all of this is true (it is), then doesn’t it logically follow that our cities should be doing everything they can to incentivize a positive behavior and disincentives a negative one? Cities like Amsterdam, Portland, and Paris have done just that with hugely positive results.

Denver is making improvements for biking, but we still rank 26th in the nation for percentage of the population that bikes to work. A pretty surprising [read: disappointing] fact given our year 300 days of sunshine per year, relatively flat easy bicycle commuting terrain, and active population.

When I ride my bike I find that I exchange smiles with other bikers, pedestrians, and people on at the bus stop or on a smoke break. When there’s a bike lane I cruise past traffic with a smile instead of feeling like this

On my bike I feel a connection to the city I live in. A physical connection; as the rubber of my tires contours the pavement I feel every crack and pebble, I’m interfaced with the texture of the surface. I ripple through a vibrant tapestry of sensation. Crisp air ignites my lungs and effervesces my skin. My nervous system is lit and alive as I scan for traffic, potholes, and pedestrians. Fall foliage, twinkling nights, or verdant summer golden hours fill my visual cortex and a rich city soundscape competes with the rushing wind to fill my auditory world. An emotional connection; I make eye contact and smile at strangers, they smile back, I put my phone away and experience the world in the present moment. And a intellectual connection: I notice buildings and statues, parks, and street art that I would otherwise drive by, I have time to ponder and wonder. My bike connects me to my city.

Besides all the ecological, economic, and health reasons I’ve laid out, riding a bike is a beautiful thing. Man’s noblest invention can give us a deeper connection and appreciation of the cities we live in and the people we share them with. I want more people to experience this with me… not to mention less people swerving and yelling at me as I do it.